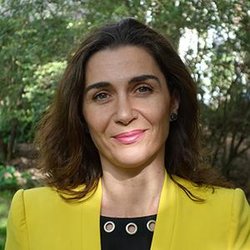 María González Pendás is an architectural historian of modernity and coloniality of the Spanish transatlantic world whose research explores the intersections of aesthetics, technologies, ideologies, and power through the built environment. Her current book manuscript, Holy Modern: Technocracy, Theocracy and the Architectures of Hispanic Fascism, studies the architectural workings of fascism, technocracy, and the imperial figment of Hispanidad in the second postwar and through the lens of Spain. Other projects have investigated relations of labor and race in México; the coloniality of concrete technologies and innovation across the South Atlantic; and the relationship between technology, religion, and secularism in global modernity.