The Corridor’s fiscal and administrative oversight are transferred to the humanities center or division-wide interdisciplinary program at each institution;

Co-Investigators are appointed at Cornell and University of Rochester; and

Central New York Humanities Corridor Endowments are complete for a total of $6.5 million.

The Corridor’s first Advisory Board is convened to offer policy recommendations and feedback to the Directors.

The Corridor begins operating entirely on the endowment funds at all three founding institutions.

Gregg Lambert steps down as the founding Principal Investigator.

Vivian M. May, Director of the Syracuse University Humanities Center and Professor of Women’s and Gender Studies, assumes the leadership role with Paul Fleming (Cornell University) and Joan Shelley Rubin (University of Rochester) serving as co-Directors.

Two new research clusters created: Humanities Futures and Inequality & Social Difference. The Linguistics cluster was expanded beyond its disciplinary origins to Linguistics, Semiotics, and the Study of Language.

"Humanities centers have become nimble collaborators …One of the most successful such collaborations is the Central New York Humanities Corridor, launched with Mellon Funds in 2006, that links humanities centers and faculty at Cornell and Syracuse Universities, the University of Rochester, and the New York Six Liberal Arts Consortium representing Colgate and St. Lawrence Universities and Hamilton, Hobart and William Smith, Skidmore, and Union Colleges."

The humanities are the cornerstone of a liberal arts education, teaching us to think critically, to solve problems, and to communicate effectively. Since its founding in 2006, The Central New York Humanities Corridor has shaped a scholarly community, freed from disciplinary and departmental silos, playing a strategic regional role linking scholars across New York State. While no single faculty body can cover all the areas of specialization that figure into the fields of philosophy, linguistics, art, musicology, and literature, The Corridor leverages existing programmatic and institutional strengths to cultivate new synergies between its campuses. The Corridor’s programs permit scholars at one institution to work alongside colleagues with complementary interests at any of its affiliated schools. Through these connections between larger research universities and smaller liberal arts colleges, The Corridor impacts a broad swath of Upstate and Central New York, facilitating the scholarship and professional development of its faculty and students. 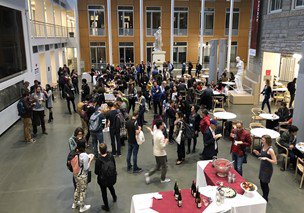 In 2014, the Andrew W. Mellon Foundation awarded a total of $3.55 million to the Central New York Humanities Corridor, permanently endowing the Corridor at each of its three founding institutions. By the end of 2017, each institution had matched the Mellon awards bringing the total Corridor endowment up to $6.5 million with:

This endowment will support in perpetuity the Corridor’s mission of increasing both connectivity and collaboration and fostering cross-institutional partnerships.