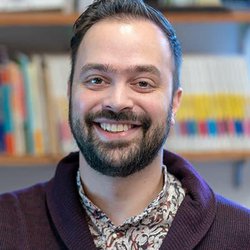 Andrew Campana is a scholar of modern and contemporary Japanese literature and media. His research centers on exploring moments of media transition, focusing in particular on poetry, digital media, and disability. In his current book project on Japanese poetry across media, he engages with expanded poetic practice from the 1920s to the present as a site where poets in Japan embraced and grappled with new media technologies like film, tape recording, television, and the internet. He is also working on a second project—on questions of digitality in electronic literature, video games, and disability arts in contemporary Japan—drawing from his experiences as part of the Trope Tank at MIT, a lab dedicated to developing new understandings of computation and literary practice. He has performed and published widely in both English and Japanese as a multimedia poet and translator.