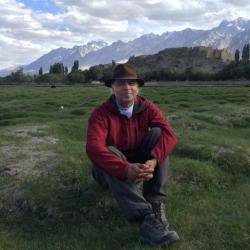 Karim-Aly S. Kassam is International Professor of Environmental and Indigenous Studies in the Department of Natural Resources and the Environment, and the American Indian and Indigenous Studies Program at the College of Agriculture and Life Sciences, Cornell University. In 2020, Professor Kassam was awarded the Global Public Fellowship along with Frederick MacDonald, a Cree Artist from Fort McKay First Nations. Together they are engaging in Public Scholarship through art, poetry, and writing on current issues of justice. In 2018, Professor Kassam, in collaboration with the Canadian Embassy in Kabul, senior advisors at the Presidential Palace, and the Afghan Ministry of Foreign Affairs, initiated the process that led the President of Afghanistan to create a position devoted specifically to addressing climate change adaptation in all government agencies. In 2017, he was awarded the University of Bayreuth (Germany) International Senior Fellowship for his contributions to the Faculty of Biology, Chemistry and Earth Sciences. In 2013, he received the College of Agriculture and Life Sciences Diversity Award for creating and fostering diversity in research and teaching. From 2008 to 2011, he was Director of Graduate Studies of the American Indian and Indigenous Studies Program. Prior to joining Cornell, Dr. Kassam was Associate Professor with the Faculty of Communication and Culture at the University of Calgary, Canada. He founded the Theme School in Northern Planning and Development Studies at the University of Calgary in 1995 and was its Director until 2003. From 1998 to 2001 he was the first Murray Fraser Professor of Community Economic Development at the University of Calgary. In 2003, Venture Magazine named him one of Alberta's 50 most influential people along with business and political leaders.Professor Kassam’s aim is to seamlessly merge research and teaching in the service of communities. His research focuses on the complex connectivity of human and environmental relations, addressing indigenous ways of knowing, food sovereignty, sustainable livelihoods, stewardship, and climate change. This research is conducted in partnership with indigenous communities in the Circumpolar Arctic, Boreal Forest, as well as the Pamir Mountains of Afghanistan, Kyrgyzstan, Tajikistan, and Xinjiang. In 2016, he was awarded 1.35 million dollars to lead a project to develop anticipatory capacity for climate change. By investigating the relationship between biological and cultural diversity, he seeks to expand the foundations of the notion of pluralism. Through applied research and teaching, he is articulating a rigorous methodology and pedagogy of hope.